England’s boxers secured all five gold medals they contested on the second day of finals at the EUBC European Schools Championships 2019 in Tbilisi, Georgia.

After having already secured four gold medals, the Three Lions’ squad were optimistic of adding to that tally in the event’s final session of competition.­

And the quintet did not disappoint, to take the team’s overall tally to nine golds, two silvers and three bronze medals.

First into the ring was Scunthorpe’s Jessica Keeton (pictured) at 46kg, who came on strong in the third round to stop her Ukrainian opponent Oleksandra Manko.

Next up was Paris Smith, of Legions, who followed up her confident semi-final win with another assured performance to beat Ireland’s Lyndon Ava Rose Henry by a unanimous 5-0 verdict at 64kg.

It was then the turn of the boys, with 40kg Sharpstyle boxer Thomas Varey holding his nerve to edge out home boxer Murad Tagievi, winning a 3-2 split decision.

There was another close bout at 50kg, where Burton Park’s Ellis Panter claimed a 3-2 split success against Hlib Hryhorian of Ukraine.

Last but by no means least was Anthony Connors, boxing at 59kg, who surged to a 4-1 victory over Italy’s David Fiore.

The results meant that nine of England’s 11 finalists earned a place on top of the podium. 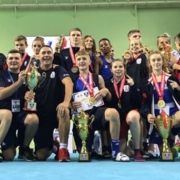