England Boxing is working with a host of boxing clubs and organisations around the country who are striving to improve life in their local communities.

To give a flavour of the great work going on, here are are just a few projects among the many that go on weekly nationwide. 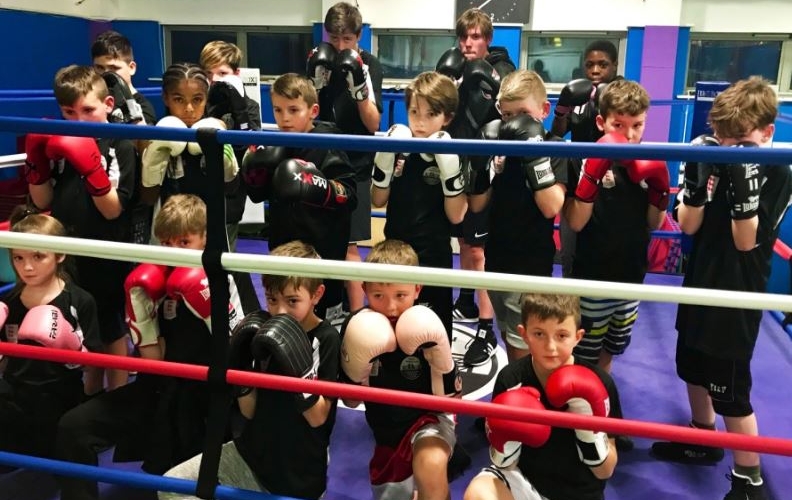 The Maverick Stars Trust is investing money in numerous boxing projects, including £67,500 specifically to support boxing clubs in parts of the country where help is most needed during 2019 and 2020.

The charity was founded by Charlotte Gilley, who wanted to give something back to the sport after training to box at her local gym Timperley ABC.

Maverick Stars Trust has pledged to support 27 projects to the tune of £2,500 in each of England Boxing’s nine regions, which will tackle issues such as knife crime, mental health and holiday hunger.

You can also read about the projects supported so far in the Maverick Stars Trust blog page. 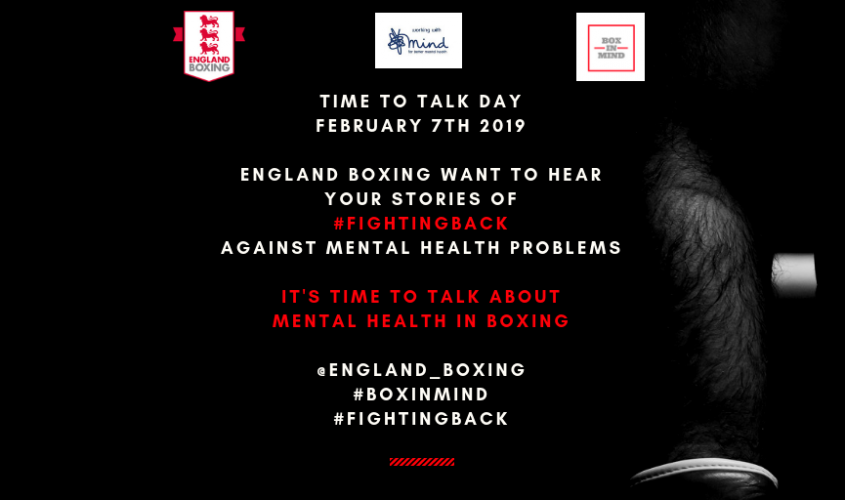 Box in Mind is an England Boxing-led project, written in conjunction with mental heath charity MIND, that aims to use the power of boxing to raise awareness of mental health problems – and help people face up to them.

A first pilot workshop for Box in Mind has taken place – with attendees gaining an understanding of how to support those suffering from anxiety, depression and other issues – and others are shortly to be roll-out across the country.

Using the hashtag #fightingback, it featured former national senior champion and now GB boxer Jordan Reynolds, as well as a police officer who has suffered with Post Traumatic Stress Disorder and a 12-year-old who has had panic attacks. 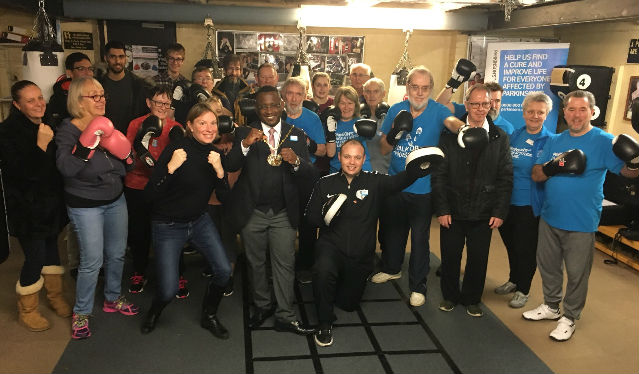 A number of clubs are now running sessions to help those with Parkinson’s and their carers to don boxing gloves and train in a safe, monitored and controlled environment.

One such club is England Boxing-affiliated St Mary’s ABC’s, based in Medway, where participants also have the opportunity to socialise and chat before and after the session – with a welcome cup of tea, of course.

The project has secured funding and donations from Kent Sport, Councillor Sam Craven and a local author, ensuring sessions have remained free to everyone in its early stages of getting up and running. 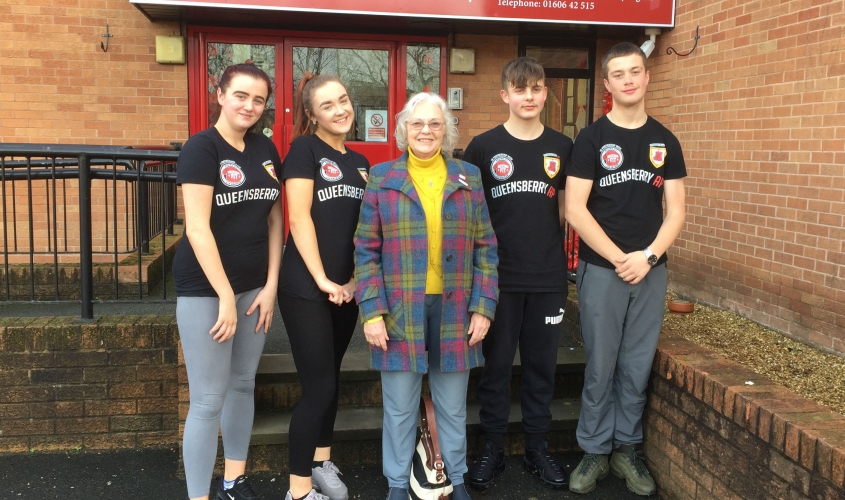 Queensberry AP use boxing as a vehicle to teach things like respect, discipline and resilience, with the aim of improving engagement at school and preventing exclusion.

Students work with our coaches on learning boxing basics including footwork and punching combinations.

On successful completion of courses, parents and school staff are invited along to mark the achievements of those who have graduated from the 12 Rounds Programme – and take part in a practical boxing workshop led by the students.

Some students have gone on to gain the England Boxing Junior Boxing Organiser (JBO award).

The programme has been supported by funding from the Cheshire Police and Crime Commissioner David Keane as part of his Safer Communities strategy. 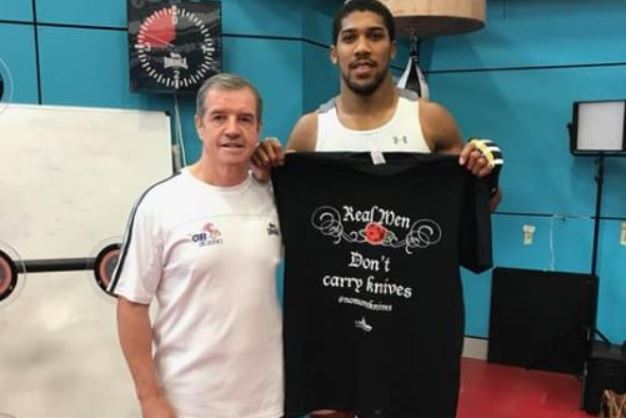 Projects to tackle knife and gun crime are increasing common at boxing clubs across the country, but one of the trailblazers has been Anfield Boxing Club in North Liverpool.

The ‘Real Men Don’t Carry Knives’ campaign, started over four years ago and has since been delivered to every school in the city – more than 15,000 children.

England Boxing provided a small £5,000 grant to the club to extend some outreach work the club leader, Alan Walsh, was doing to counter young people in the area carrying knives.

Since then the project has gained an enormous collaborative momentum now engaging football clubs, Merseyside police, many Liverpool hospitals and businesses, as well as the education sector.

Alongside this, numerous other boxing clubs have now been successful in securing grants to tackle knife crime. 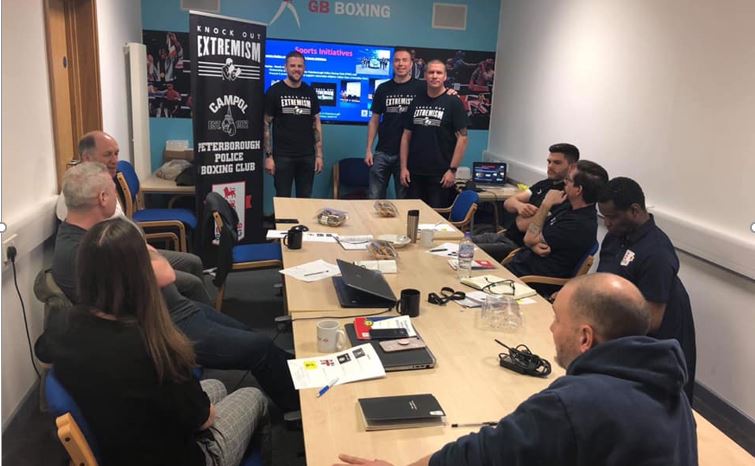 The Knock Out Extremism initiative has been developed with the aim of preventing radicalisation by using boxing as a diversionary tactic.

Peterborough Police Boxing Club has hosted two events that have combined a boxing show with the delivery of various messages from ‘Prevent’ officer Richard Ellison, as well as the county’s Police and Crime Commissioner.

It is is expected the programme will be expanded beyond Peterborough in the near future.

Alongside this, the Knock Out Extremism team have delivered their ‘Prevent’ training to the England Boxing Club Support Officer team, who are to spread their knowledge across their vast network of amateur boxing clubs. 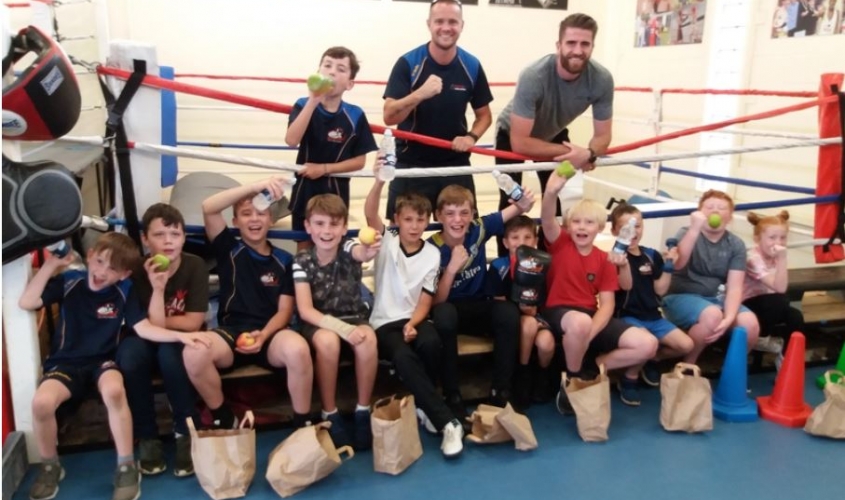 Warrington Phoenix Fire Boxing Club, housed within the Warrington Fire and Rescue station, has delivered a ‘Fit and Fed’ programme that was first pioneered by Street Games.

During the school holidays, young people are encouraged to take part in daily healthy activity while it is ensured they also receive a nutritious lunch.

The scheme targets seven to 14-year-olds with the lunch and activities provided free of charge. Attendees are given the option to join the club .

The Maverick Stars Trust band Warrington Borough Council have provided financial support to provide qualified coaches and transport for some of the participants. 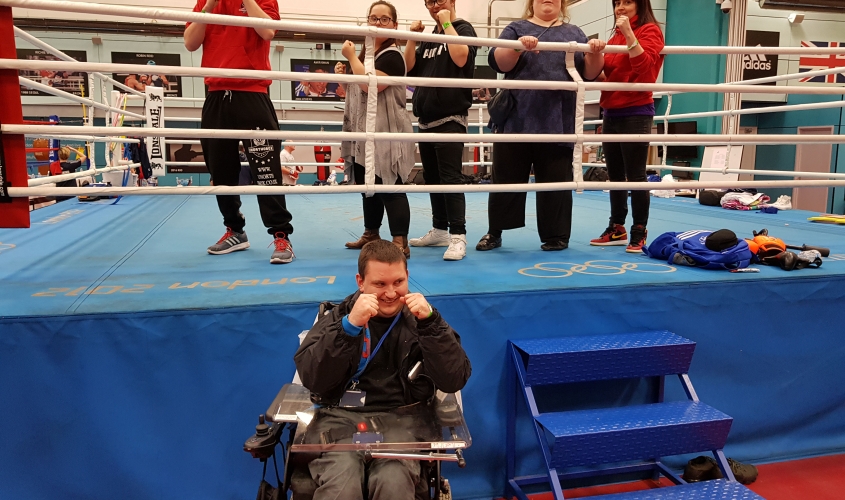 Unorthobox is a not-for-profit Community Interest Company (CIC) based in Leeds and Bradford which provides the opportunity for people with or without disabilities and long-term health conditions to train or box together.

It works in partnership with International Mixed Ability Sport (IMAS) who are promoting an innovative approach to social inclusion through sport and education worldwide, they have been working together with England Boxing to help boxing clubs nationwide become more inclusive.

The organisation has been visited in the past by Dragons’ Den star Theo Paphitis who was impressed by a Tweet sent to him by founder Sarah-Jane Murray. 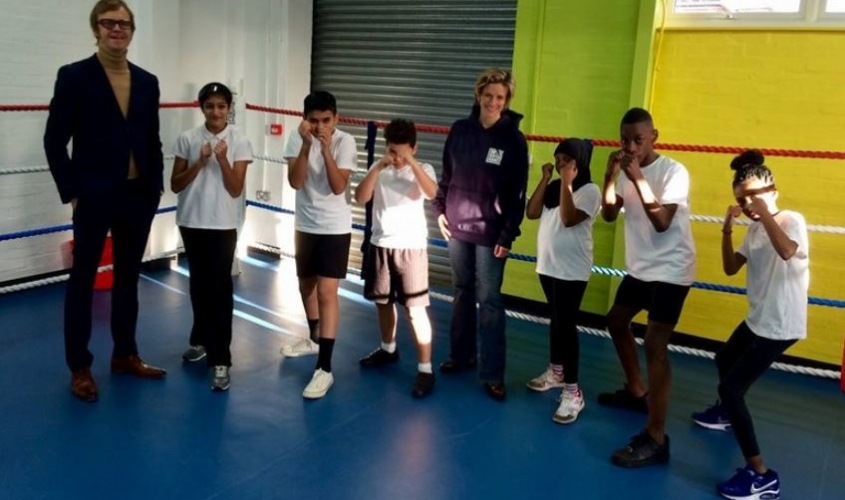 Bristol club Empire carry out work to improve the health and wellbeing of some of the most vulnerable people in its local community.

Empire Fighting Chance is concerned about the whole person – whether that is mental, social or personal wellbeing – to help individuals get back on track.

One such example is a teenage girl who when she first attended was scared to leave the house and had to attend initial group sessions with a learning mentor from school.

She was extensively self-harming, suffered from severe anxiety,  reported she had no friends and had very poor self-esteem and self-confidence, but over a two-year period and stopped self-harming, reduced her anxiety levels and passed her GCSEs, gaining a Peer Mentoring Qualification. 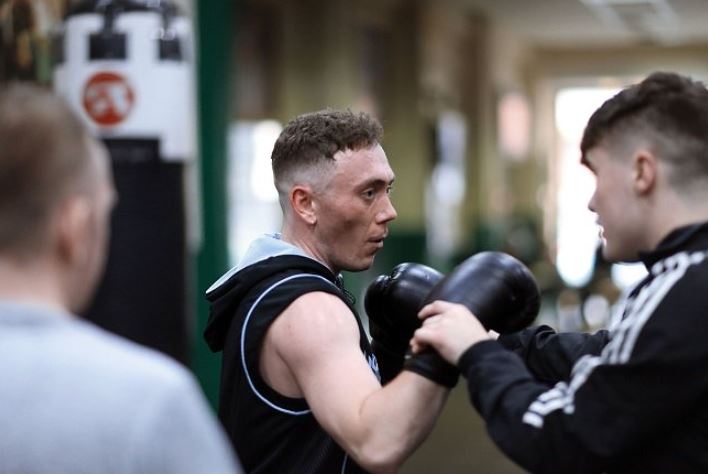 Pat Benson Boxing Academy delivers physical activities such as boxing and circuit training, alongside their work to help those with specific needs.

The Club’s Mind Fit project was recognised at the StreetGames National Awards 2018 when it won the National Mental Health and Wellbeing Award. 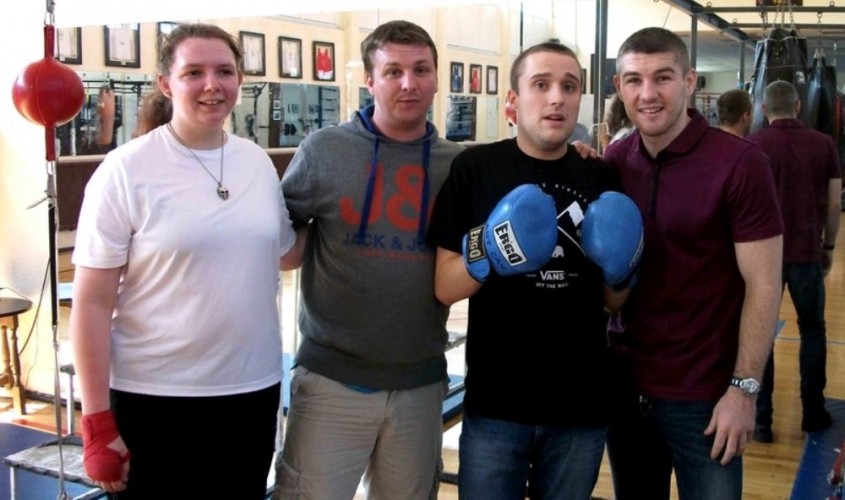 Rotunda Boxing Club in Merseyside has been providing fun alternative activities for service users at Kaleidoscope, a centre which was set up by parent-led charity, Autism Initiatives.

Kaleidoscope is a Liverpool-based Community Resource Centre that provides a variety of activities and specialist support services for people with autism, both in the Centre itself and using local community facilities.

Members of the boxing club were delighted to receive a visit, where attendees were able to have a go on the punchbags and exercise bikes.

Visitors had an opportunity to meet and pose for photos with local celebrity boxing brothers Liam, Callum and Paul Smith, as well as Jamie Carragher who trains at the gym. 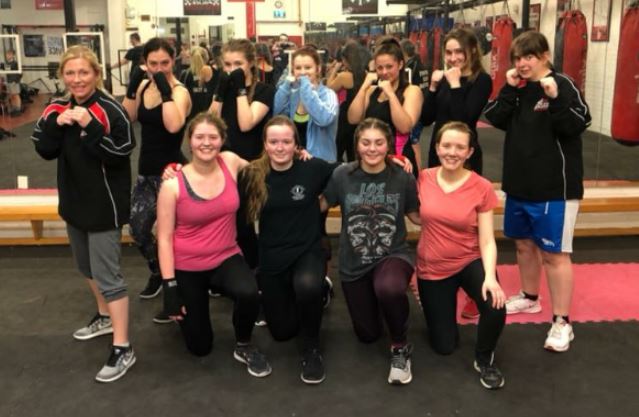 In addition to its bid to produce future champions, South Wye Police Boxing Academy nurtures a strong desire to bring the many sections of its community together.

The club has been running sessions for members of the immigrant population and through membership of the established boxing club they are also becoming accepted as part of their new community in Hereford. The local community, meanwhile, are also benefiting by learning about new cultures.

South Wye is well linked to MIND, with projects targeting young members with mental health conditions, while students from a Pupil Referral Unit have regular workshops with a Midlands coach, who is a prison officer.

The club also runs outreach boxing sessions for five different secondary schools in and around Hereford with a strong encouragement for those pupils to sign up to the club.

Go to the Case Studies page to read more examples of the great work done by organisations and clubs working alongside England Boxing.