You are here: Home / News Articles / A tribute to Midlands official Fred Cummings

England Boxing is saddened to learn of the passing of well-respected Midlands official Fred Cummings following a short illness.

Growing up in Birmingham, he boxed for Wilmot Breeden ABC, which was based at the sports club of the automotive parts manufacturer.

As an official, Cummings acted as a Grade A judge and was also an examiner and tutor of officials.

He was Head Ringside Official for The Midlands County and gave more than 50 years of service in all.

Cummings officiated at countless National Championships up and down the country where his willingness and good humour earned him many friends.

Mick Budden, who has recently stepped down as Technical, Rules and Officials sub-committee secretary, and frequently appointed Cummings for major events, said it was ‘a very sad loss’.

“Fred was a delight to work with and never had a cross word to say about anyone,” he added.

“He was a lovely guy and so helpful – when some people didn’t want to officiate at certain tournaments, he would always oblige and step into the breach.”

He remembers a man with a ‘cracking, dry sense of humour’ who was ‘really down to earth’.

He said: “I was a couple of years younger at school than Fred and used to play rugby with him (Fred is pictured below, centre, holding the ball, with Jim next to him) and we got on pretty well.

“He worked in the police force for more than 20 years and I remember he got an award when he arrested someone despite having been stabbed in Handsworth, one of the toughest areas of Birmingham.

“Then some years later I went to a show in West Bromwich and he was officiating and he recognised me. He said they were always on the look-out for officials and that’s where it started for me.

“He didn’t train me himself, but I know he trained countless others and from the messages that I’ve had from people who have heard about his death, it’s clear he was very well thought of and people were appreciative of what he has done for them.”

Midlands Regional Association Secretary, Louise Gibbs, was one of those who benefited from Cummings’ knowledge.

“He took my judges’ course some 15 or 16 years ago and he has been very well-respected on the boxing circuit,” she said. There will be people all over the country who will be saddened by this news.”

Friend and fellow official, Tom Clarke, added: “I have known Fred for over 25 years, and I travelled together on numerous occasions to officiate at Boxing Championships throughout the UK. He was passionate and a font of knowledge on all aspects of boxing, amateur and professional.

“He was always the first to crack a joke, his sense of humour was second to none, he loved to play his mouth organ and break out into song when the boxing had finished for the day and we got together over a social beer in the evenings. We had some memorable journeys and experiences together.

“Fred will always be remembered in the Midlands for his unique style when announcing as MC. He took great delight in enlightening the audiences, coaches and boxers on the rules of boxing as a warm-up prior to the tournament starting. He just rolled out fact after fact whether it be a scoring blow, or fouls, or the process of scoring points.” 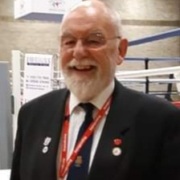