Two England boxers have been promoted to number one seeds for the England Boxing National Amateur Championships 2019 after GB have withdrawn two boxers due to injury.

Harris Akbar has been forced to pull out of the Under 69kg category with a hand injury, meaning Harvey Lambert of St Paul’s replaces him as number one seed.

In the Female Under 57kg category, Karris Artinstall has suffered a dislocated knee, so the new number one seed is Raven Chapman of Arena.

The standalone Finals Day of the National Amateur Championships will be staged at Manchester Central on Saturday 13th April with ticket details to be announced shortly. 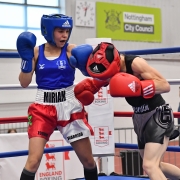 Cornwall edge victory in Clash of the Celts
Scroll to top