You are here: Home / News Articles / Olympics day one: Gunner Artingstall ‘switched on’ to help...

Olympics day one: Gunner Artingstall ‘switched on’ to help GB begin with a bang

The 26-year-old featherweight (57kg), who had to battle hard for her place in Tokyo with a box-off victory at the European Qualifying tournament in Paris last month, took down Botswana’s Keamogetse Sadie Kenosi at the Kogukikan Arena.

Artinsgsall, proud to be the first member of British Army boxing team to compete at the Olympics, looked composed throughout to deservedly get the better of her African opponent.

She will now face Brazil Jucielen Romeu at around 11.35am UK time on Monday (26th July) for a place in the quarter-finals.

“I’m excited for this tournament and I’m in a really good shape, mentally as well as physically,” said a delighted Artingstall.

“In the previous tournament I don’t think I was as mentally prepared whereas here I’m cool, I’m calm, and I’m collected.

“All I need to do is make sure I switch on as soon as I hear that first bell – I’m capable of beating all the girls at this tournament.

“Seeds mean nothing to me. It’s just a number at the end of the day. As long as I’m in there on my A game I know I’m a nightmare for anyone to beat.”

But it was not all good news for GB, as fellow featherweight (57kg) Peter McGrail bowed out at the first hurdle.

The Everton Red Triangle faced Chatchia Bandee, of Thailand, who was appearing in his third Olympics.

The 36-year-old used that experience to good effect to secure a unanimous victory against the Liverpudlian, who had been one of only two Britain’s to secure his Olympic berth at the original  European Qualifying tournament in London last March, which was suspended part-way through because of the Coronavirus Pandemic. 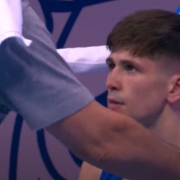