Emily Asquith clinched Team England’s fifth gold medal of the final day of action at the Nations Cup for Women in Serbia.

After Sunday had produced four gold medals for England – for Megan Bainbridge, Alice Pumphrey, Paris Smith and Amber Moss-Birch – the Bridlington boxer wasted little time in clinching her place on top of the podium.

Asquith – reigning European Youth champion – stopped opponent Ekaterina Yachmeneva in the 81kg+ division, having beaten another Russian in her semi-final. 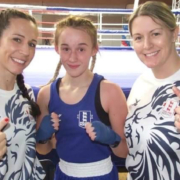 Get involved in the Birmingham 2022 Commonwealth Games
Scroll to top