GB Boxing have named the eight-strong squad who will represent England at the AIBA World Boxing Championships 2021 in Belgrade, Serbia, which will take place from 26th October to 6th November.

It is an opportunity for a new generation of boxers to showcase their talent at a major tournament as the seven that competed at the Tokyo 2020 Olympic Games were not considered for selection.

The team will compete across the new weight classes (recently introduced by AIBA) and includes a mix of experienced boxers along with some newer additions to GB Boxing’s Podium squad.

MacDonald and Akbar have both been part of GB Boxing’s Podium squad for more than four years and travelled to Tokyo 2020 as sparring partners to help prepare the boxers that competed for Team GB at this summer’s Olympic Games.

Richardson is heading to Belgrade on the back of a good run of form.  The 24-year-old year old won the Bocskai tournament in Hungary in February 2021 and was unlucky to be denied the opportunity to compete at the Tokyo Olympics after the qualification pathway was cut short as a result of Covid-19.

Richardson said: “It was disappointing to miss out on Tokyo, but I’m now fully focused on reaching Paris 2024.  This will be my first experience of a world championships, but I am in good form and feel that I am improving all the time so am looking forward to it.”

The team is completed by Harvey Lambert at welterweight, George Crotty at light-heavyweight, Lewis Williams at heavyweight and Delicious Orie, who will box at super-heavyweight.

GB Boxing’s Performance Director, Rob McCracken said: “The world championships is an incredibly tough assignment so this is an opportunity for a new group of boxers to test themselves at the very highest level.

“There is a lot of talent in this team, however (the restrictions imposed by Covid-19 means) they have had very little competition over the last 18 months.

“Taking part in this tournament will be a great learning experience for the boxers and will enable myself and the coaches to get a clear idea of where we are and what we need to do to develop this group.” 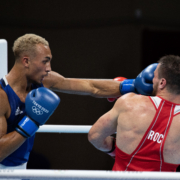 Box and learn by grabbing the last DiSE Programme places in London, Midlands...
Scroll to top