Thanks to funding from the Maverick Stars Trust, Bootle ABC have established a successful female-only hub at their club in the suburbs of Liverpool that has now been running for more than six months.

The project started with the first session on 2nd April 2019. Since then, two sessions have run per week, on Tuesdays and Thursdays.

The sessions originally ran between 11am and 11.30am, but after initial engagements with the group, it was requested that they were moved to evenings as this would make it easier for the membership to attend.

From week eight onwards, sessions have run on Tuesday and Thursday evenings from 6pm to 7:30pm. It was opened up to all as a way of keeping fit for parents or carers with family commitments in the evenings. However, uptake remained female-only.

Evolution of the Project

Sessions have since been well attended throughout the first six months, and, although the project goals remain the same, the project has evolved from a day time Parents/carers hub for all, to a female only boxfit hub, where there will be no males in the building to allow the group to train in an environment they feel comfortable in.

In the past, these women have said they have been put off exercise from mainstream sports centres and clubs because they believed them to have a masculine environment. Another obstacle was that, in all-female classes, they felt they would be ridiculed for their levels of fitness or body shape. 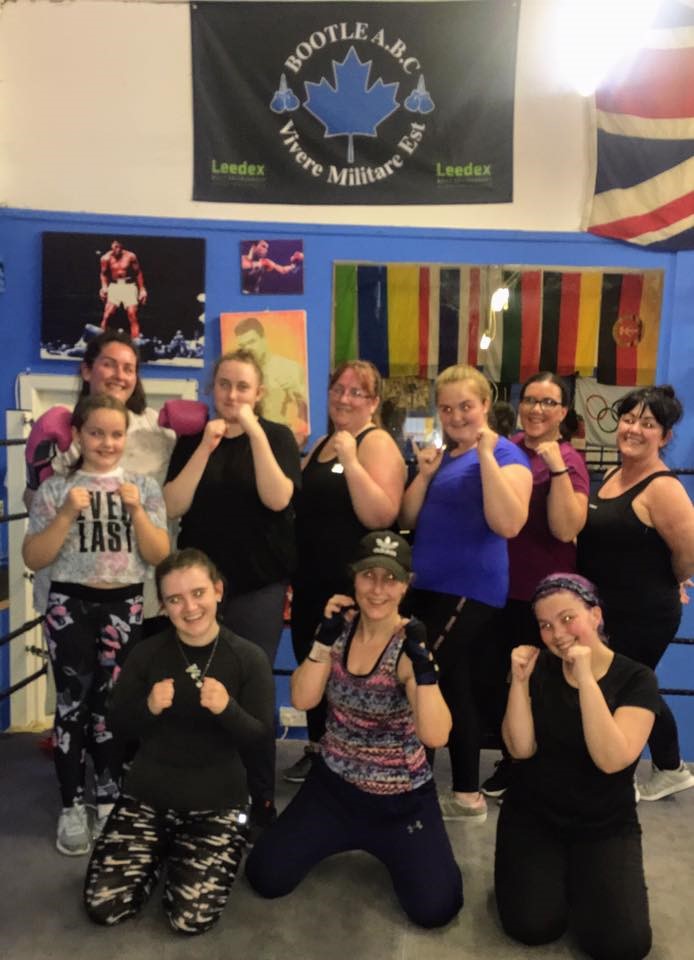 The age range is from 16 years through to 61, all of whom train together in a safe, friendly environment where they have developed a strong bond and friendship.

There is an overall team feel, where they push each other to reach their own individual goals. Members are from different cultural and religious backgrounds, although the majority of the group are of white British/Irish decent, which makes up the biggest proportion of the local population.

Of those members who have completed the 10-week improvement questionnaires, the majority are showing a much greater score in their self-assessment of their own physical and mental wellbeing, along with a reported increase in confidence since joining the hub.

The club has recorded these questionnaires in order to compare them to previous self-assessment scores and completed a weekly register of attendance.

Bootle have continued to keep a pathway between the hub and the parent club in order to provide access to the competitive element of the club.

A few members have tried the competitive class, for helping with fitness, but, as yet, none have committed to becoming a competitive boxer.

One member has, however, rejoined the region’s officials team since starting training in this class.

This member has been registered with England Boxing as an Official/Coach in the past but had recently stepped back from the sport. She is now back judging and is now also about to take over the running of these sessions to cover in the regular coaches absence, using her coaching qualification for the first time in her life.

Establishment of a new class

Already in the first six months of the project, a new class has been established due to the growing demands. The host club now also runs a boxing class on Saturday afternoons, with the uptake of this class largely by the same members that attend throughout the week.

It fills organisers with confidence that they will be able to sustain these classes, as Saturday classes are as well attended as those during the week.

The initial aim was to engage 30 retained participants, with 20 to attend each session, who wouldcontinue to pay £2 per session on completion of the project and 100 attendi sessions in all throughout the time of this project.

Organisers believe they are on course for meeting this goal, with 47 different individuals try the hub in the first six months. Turnout is regularly around the 20 mark, most of whom attend all three weekly sessions and all at least twice a week.

An extra session has been set up as targeted, and one participant has become a leader/coach/official, while there will be a continued drive to encourage members to take part in competitive classes.