Former National Champion and EUBC Silver medallist, Stacey Copeland, has recently been getting national media recognition for ‘Pave the Way’, a project she founded last year.

With the 2018 Sunday Times Sportswomen of the Year Awards set to take place In London on November 1st, Copeland featured in an article in The Sunday Times last weekend in which she spoke about Pave the Way, which aims to inspire women and girls through sport but also promotes women who work in sport though are not athletes and therefore receive little recognition for their efforts.

Referring to ‘Pave the Way’ Pioneers in non-competitor positions, Copeland told The Sunday Times: “There will be loads of girls who love sport but they might not be good enough to earn a living from it, so I wanted them to know that, with all the skills they’ve got and their passion, these are the jobs they could do.”

In July this year, the 37-year-old defeated Mapule Ngbane in Zimbabwe to become the first British woman to win the Commonwealth title, a feat made more impressive by the fact that it comes after injury ended her football career and she also works as the Head of Development at Parrs Wood High School in Manchester.

The article with The Sunday Times can be found here: https://www.thetimes.co.uk/article/stacey-copeland-pulls-no-punches-in-quest-to-unlock-potential-swoty-gx65bngdb

Stacey’s dad, Eddie, is himself a former ABAE Champion and England representative. She is an inspiration to so many and will continue that trend as she is developing Pave the Way into a social enterprise, so that she can fund free presentations in schools to inspire the next generation. 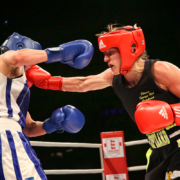 SportsAid week is one month away