Wayne Smith, a coach at St Mary’s Amateur Boxing Club, has recently been awarded the Kent Sport KUDOS award for his work with Olympia Boxing CIC.

Olympia Boxing CIC began a partnership with the Autism Consortium and designed ‘Thera-Box’, a programme that integrates boxing fitness with Speech, Language and Sensory Processing Therapy.

Pictured collecting the award alongside partner Louise Elliott from the Autism Consortium, Wayne and Louise delivered a pilot project in two Special Educational Needs (SEN) schools in Kent before being given funding to expand the programme into five more schools.

The project’s success on the students involved led to it being nominated for the KUDOS awards and, after voting took place at Kent Sports Everyday Active Conference on October 9th, ‘Thera-Box’ was declared the winner, taking home the award and £500 towards the project in the process.

If you would like to know more about the programme, please contact wayne@olympiaboxing.co.uk, or watch Thera-Box’s nomination video here: https://www.youtube.com/watch?v=y45yLNkCI8U. 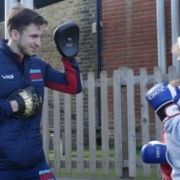 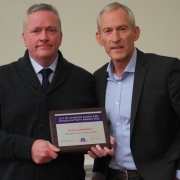