It should also be noted that these 12 medals takes the cumulative medal total for 2018 to an incredible 34 medals, surpassing 2017’s record-breaking total to be England’s highest ever medal haul in a year.

Alex posted an impressive first round as she seized the initiative away from the Turk.  Quality combination shots from Alex ensured she took a deserved gold.

In a tough contest against a useful Russian, Megan came back well in the second round after conceding the opener.  With the bout in the balance Linkova raised her game in the last, forcing a standing eight count to take first place, however Megan can be justifiably proud of her silver medal.

In an all southpaw encounter, Courtney’s industrious first and third rounds took her to a deserved victory.   This was the English girls fourth win of the championships and with each performance her confidence would grow to eventually reach the top spot! In addition, Courtney was named the best female boxer at the tournament – a stunning achievement to cap a great event for her.

A near punch perfect performance from Emily as she controlled the pace throughout this final.  A standing eight count in the last against the Pole was the icing on the cake for the new European champion from the England team.

This pairing would be one for the purists as both boxers displayed great technical skills. Even though Joe was firing on all cylinders in the later part of the bout, his cautious start would prove costly as the rangy southpaw from Azerbaijan did just enough to impress the  judges, en route to gold.

A warning in the last session looked to have scuppered Adam’s chance of gold, with the contest having been so close.  However Adams efficient shot selection saw him over the line and crowned a European junior champion.

George struggled at times to pin down an elusive opponent in the very last contest of these championships for an England boxer. After three desperately close rounds, the Bulgarian edged the verdict leaving George to take silver. 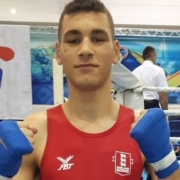 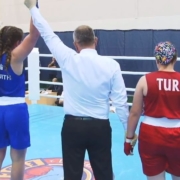 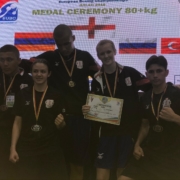 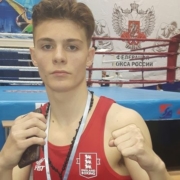