A member of Jimmy Egan’s Boxing Academy has been presented with The Royal Humane Society’s bronze medal by HRH Princess Alexandra.

Liam Pastore was recognised for his bravery in risking his own life to rescue a woman and her step-daughter when they were at risk of drowning.

It was back on 18th June 2017 that the then 14-year-old (now 16) was on a day out with friends and their family off the coast of Formby Beach, Southport.

The strong tide had dragged the two females, who were not confident swimmers, into deep waters where they got into difficulty and were both unable to swim back to shore.

As the young girl screamed for help and the woman had stopped breathing and become unconscious, Liam realised there was something seriously wrong and swam over to them.

He grabbed hold of the woman and the girl and swam them back to safety, where the lifeguards then took over. The woman was later airlifted to hospital.

Liam received his award at the Haberdashers Hall in London where the City of London’s Police Commissioner, as well as those who saved lives during the terrorist attacks on the Westminster and London bridges, were also in attendance.

“The fact that Liam said he ‘did what anyone else would do’ just goes to show how modest he is, but we as a family are all extremely proud of him,” said mum Aiysha Peach.

“If it was not for Liam these two people may not be alive today. Because he is an amateur boxer, and trains three times a week, he is very fit and strong for his age.

“I think that undoubtedly his strength and stamina played a huge part in him being able to rescue these two strangers.”

The prestigious bronze award was founded in 1837 and has never been given to someone of Liam’s age before.

He will go into the London Metropolitan Archives, which date back to 1774. 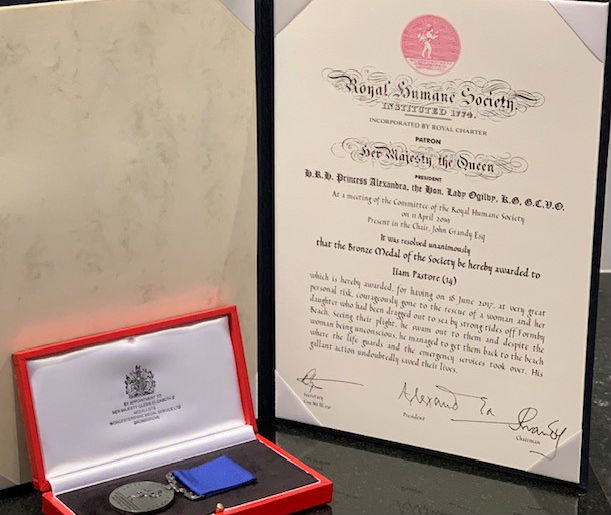