England Boxing has been saddened to learn of the passing of well-known Tyne, Tees and Wear boxing coach John Dryden.

A coach at Wellington ABC in Middlesbrough, which he set up in the 1980s, he also formerly coached at North Ormesby ABC.

Taking up boxing as an 11-year-old with Billingham Synthonia, he went on to become Northumberland and Durham champion before later boxing for the Army.

Secretary for the Tyne, Tees and Wear Region, Phil Hattan, said: “John was a legend in our association and a former England Boxing coach and educator, working alongside Kevin Hickey and Ian Irwin.

“I have personally known him for over 40 years and I am very saddened by his passing as he was a great man.”

Dryden’s list of champions included John Pearce, who won gold at the 1998 Commonwealth Games in Kuala Lumpur, along with ABA titles, and who was a former opponent of Carl Froch.

England Boxing would like to send its deepest condolences to John’s family and friends. 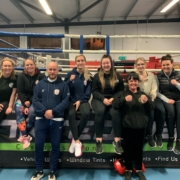