Brummie Commonwealth boxing champion, Galal Yafai, explains his pride for the city, hopes for the future of boxing and wanting front row tickets at Birmingham 2022.

A passion for boxing runs through the veins of Birmingham-born flyweight, Galal Yafai. His older brothers Khalid and Gamal have led successful careers of their own, but despite having big shoes to fill, Galal has never held back when it comes to his own boxing triumphs…

“I had my first fight at 18, which is a bit old for a boxer to start, but then I had to go to work when I was about 20. It was getting difficult to manage both [work and boxing], so, I thought I’d give it my last shot and luckily, I got the chance to get a trial for Team GB. The year later, I qualified for the Olympics.”

After competing at the 2016 Rio Olympics, Galal’s power and perseverance took him to the Gold Coast 2018 Commonwealth Games, where he won gold in the men’s light-flyweight division.

“The support back at home was amazing. We don’t often get shown on TV, so it gave me more of a platform. When I came back home, I just celebrated a lot with my friends and family, as I’d be out there for quite a long time. Winning a Commonwealth gold medal was a big thing and I was proud to do it for Team England and for my family and friends.”

The home that he so proudly refers to is Birmingham, the city that Galal has lived, worked and trained in for his entire life:

“Birmingham is a big thing, it’s my home city… I’m born and bred. So whenever I win anything or compete in anything, I’m representing Birmingham as well as Great Britain.”

It’s with this pride that Galal was invited to appear on the latest campaign for Birmingham 2022, through which he hopes inspire the young people of the city to take up the sport:

“I think inspiration is the most important thing. You always need someone else coming through and doing well in their sport and their community.

“There’s loads of opportunities for boxing for young people in Birmingham. I go back to my old club now and again, and I see a lot of young kids coming through, so I think there’s a lot of hope for the next few years.

“My club was proper run down, but it toughened us up. We weren’t surrounded by people who had luxuries. It’s a real mix of people and diversity. People from different backgrounds, areas and ages. The head coach, Frank O’Sullivan, he brought out the best in everyone. He’s been coaching for 60 years. He’s done a lot for Birmingham. The gym would have 40-50 people there every night and he’s there every night.”

And despite his plans to turn pro after the Olympics next year, Galal is still eager to experience the boxing action at Birmingham 2022:

“I don’t live too far from where the boxing will be held at the NEC, so yeah I’ll come round and watch. I best get a shout out!

Galal Yafai appears in Birmingham 2022’s latest campaign, where he’s joined by other elite athletes who all have an affiliation with the West Midlands.

Article courtesy of www.birmingham2022.com/, where you can fin out much more about next year’s event, including the boxing schedule and how to secure tickets to watch the action. 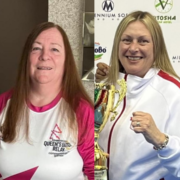