England Boxing has been sad to learn of the passing of Tony Burns MBE, who helped develop a host of Olympic and world champion boxers.

At his beloved Repton Boxing Club, he coached the likes of Audley Harrison, John H. Stracey and others to success on the domestic and international stage.

Born in Wales, he boxed as an amateur for Repton and Fitzroy Lodge before moving into coaching at the Bethnal Green club, devoting 45 years of his life to boxer development there.

It is estimated he helped nurture 300 boxers who went on to win national titles, while 10 went on to compete at the Olympics.

He was awarded his MBE in 2009 for his services to amateur boxing.

The tributes for Tony have poured in on social media, both from those who knew him best locally and big names in the sport, underlining the high respect in which he was held.

“Few men in my lifetime had the kind of impact on me that ‘Burnsy’ certainly did. It’s a massive loss.”

London Boxing added: “‘Burnsy’ boxed as an Amateur for Repton, Fitzroy Lodge and internationally for Wales.

“He was a very successful coach and was often compared to the likes of Sir Alex Ferguson of Manchester United FC with the amount of success nationally and internationally he was achieving at Repton.

“Our thoughts are with his family and friends at this difficult time.”

England Boxing director, Gio Brugnoli, said: “Tony was Repton Boxing, and was a terrific bloke with more champions than I have fingers and toes.

He travelled all over to support his lads when they boxed for England and I would bump into him. He had huge respect for anyone and everyone in boxing and never forgot a face.

“He was a gentleman and everyone loved Tony. He was a great man who will be missed by many.”

“Tony devoted his life to the sport and the development of the younger generation within the community. He saved many lives and was loved by many. Rest in peace.”

England Boxing would like to add their condolences to Tony’s family and friends.

Listen to Tony talk about his time in amateur boxing in interview with Ben Doughty by clicking here. 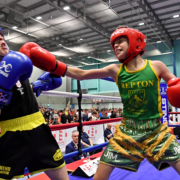