Six boxers who have come through the England Boxing Talent Pathway and are now on the GB Boxing squad have been selected to compete at the upcoming EUBC Women’s European Boxing Championships in Budva, Montenegro from 14th to 22nd October 2022.

They are joined by Tokyo 2020 Olympian, Charley Davison, Shona Whitwell and Hannah Robinson, who all won gold in their most recent outing at the Balkan Tournament in Bulgaria at the end of September.

Newcomer Elise Glynn completes the line-up and will box in her first major international tournament in Montenegro.

“Our preparation has been good,” said Commonwealth Games silver medallist, Resztan, who came through at New Astley in Cambridgeshire. “We have been away to Italy and Ireland for training camps, and we’ve also had Germany, France and China come to the GB Boxing gym in Sheffield so the whole team is ready to go.

I got three good bouts at the Commonwealth Games so I can take plenty of confidence from it into this tournament and my expectations always stay high.”

PS Boxing’s Robinson was recently added to the World Class Programme (WCP) and is now training full-time with GB Boxing.

She said: “This will be my first major tournament, so I am going there without any expectation or pressure on myself. I want to go out there and have people say ‘who is this new girl?’. I am really looking forward it and to putting on some good performances.”

Boxing at featherweight will be West Warwicks’ Glynn, who only recently made her senior debut for GB Boxing at the Balkan tournament where, despite losing in the first round, she put in a very impressive performance against Italy’s Tokyo 2020 bronze medallist Irma Testa.

Glynn said: “I started attending camps with GB Boxing in June, I have had great preparation and spent lots of hours sparring with Karriss Artingstall. It’s amazing to be able to train with an Olympic medallist and it’s made me so determined to go on to succeed at the Euros.

“I went to the Balkan tournament and drew probably the number one seed and favourite to win gold at the European championships.

“She has won five European golds and took bronze in Tokyo, and I only lost on a very close split decision so I haven’t let it get to me. I’ve gone back to the drawing board, sparred with boxers from France, Germany and China last week and I’m ready to go.” 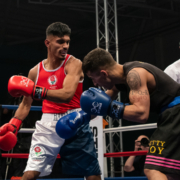