You are here: Home / News Articles / Could you be a Level One Coach Educator?

Adorning the walls of the Sheffield-based club’s gym are newspaper cuttings of a former champion who is now one of their coaches.

Sharon Holford was a three-time ABAE title holder – becoming her area’s first female national belt winner in 2007 – and a European gold medallist during her own highly successful career in the ring.

Now she has turned her attentions to developing the next generation of women and girl boxers, with Shereen Hutton and Charlie Wild two of her current proteges, with both heading to the George H Carnall Centre in Urmston, Manchester to box in the UK’s first all women and girls boxing event (8th and 9th December).

More than 190 boxers have signed up to compete, and Holford is delighted the club where she gives up her time to volunteer is going to be part of the historic occasion.

“It will be a massive event and really great to get two of our girls out there boxing, as well as get to see a lot of the other talent that is out there across the country,” she said.

“It will be great, I think, to help develop more women boxers and is something really good for them to target and look forward to entering.

“Because this is a big event, it is going to be really good experience for the two boxers of what it is like to box on such a stage and in such surroundings, and to be around the other boxers as well.

“Women’s boxing is getting bigger and bigger, and I think things like this will help it go up another level. I think it will inspire women and girls to go along to their local boxing club to train and, in some cases, compete as well.”

For Hutton, boxing at England Boxing Women’s Winter Cup represents another significant moment in her journey in a sport she first took up in 2016 to raise money in memory of her mum, who had passed away through cancer three years earlier.

Seeing it as an ideal way to get fit, the Schools and Colleges Engagement Coordinator at Sheffield Hallam University soon liked it so much that she was hooked.

“When I lost my mum, MacMillan were a massive support in the final stages and I wanted to do something to raise money for them – and I wasn’t very keen on running!” she said. “I first trained for a one-off bout over eight weeks and I thought that would be it, but then I got a boxing bug so joined an amateur club.

“The satisfaction I got from it, along with the enjoyment and fitness, was just what I was looking for.  I was a little bit out of shape when I first started and needed to lose a few pounds and since then I’ve gradually lost around four-and-a-half stone. It’s changed my lifestyle for the better.

“My cousins and other family members had boxed, so I thought I would give it a go. I’ve always been really strong right from school and the coaches said so when I started, plus I’m a southpaw as well, which people tend to hate! I knew if I could lose weight and keep my power I could do well.

“I think I have my mum there in the back of my mind when I box and when I feel like I’m struggling or think I can’t do it any more, then she is there to give every motivation because I am boxing for her.”

Hutton is relishing the two-day England Boxing Women’s Winter Box Cup and all that it brings.

It will give her the opportunity to add to her competitive experience, which so far numbers eight bouts, the first of which has stood her in good stead for those that have followed.

She added: “My first bout was for Yorkshire on the Isle of Man as a last-minute stand-in with four days’ notice and, though I lost the bout, I learned a lot from it and the girl I boxed was really thankful for steeping in, and remains a friend.

“I did the Esker Box Cup in Dublin, which is all female, and I really enjoyed it, so it’s made me really excited for this event with it being close to home and the first of its type.

“I usually like watching other boxers before I go on to box, to get a handle on the atmosphere, so it’s great that this time when I do that I will be watching other women and girls.”

Joining Hutton in the North-West, Wild is a former rugby player who has changed sports to good effect, having boxed for just over a year now.

“I picked some injuries playing rugby that meant I couldn’t carry on playing to the level I wanted to and I missed that physical side of it, having been quite used to getting hit hard in tackles,” she said.

“I have always been really competitive and I like to keep fit, so it’s been an ideal transition for me. There’s nothing really quite like the adrenaline rush you get from being in the ring.

“I did the (mixed) Harringey Box Cup last year, so I imagine it will be something similar in style.

“It’s really exciting to have our own women’s competition because a lot of the others are dominated by men, and they take a lot of the headlines.

“In this case, people are there solely to watch women’s boxing, so it’s fantastic to be a part of that.”

You can go along to support the boxers on both days of competition, with doors for the spectators open from 10am. Admission is £15 for adults and £5 for concessions (under-5s are free). 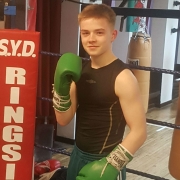 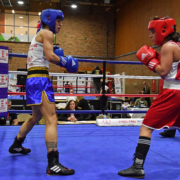