The Royal Navy has held the UK Armed Forces’ first ever all-female amateur boxing event at HMS Temeraire in Portsmouth.

The 22-year-old welterweight faced off with Golden Gloves fighter Xian Price and won by a unanimous decision.

Colbourne boxed for England as a youngster and, after taking some time away from the ring, she is now looking to climb back up the ranks.

She said: “Just to come back and crack on, to be involved in it again and be in my happy place, is amazing.

The night started with Channice Bond’s second bout of her career. She was coming up against debutant Jasmine Elkington who was representing civilian club Fighting Fit.

The Navy boxer was given a number of standing counts throughout the fight, which meant that the bantamweight contest was won on points by the debutant.

The second bout of the night was an all-Navy affair. Able Seaman Charlie Denham took on Amy Briddle and it was Denham who took the victory.

It took two rounds for Esser to stamp her dominance on the fight, as Ward was forced to retire.

“This was my second fight,” said Esser. “I won my first one by unanimous decision at HMS Collingwood.

“It definitely makes you feel good walking out to your song. When you are up there, you don’t hear anyone else. It’s just you up there with your coaches.”

There were also wins on the night for Steph Armstrong, Anneto Barreto and Andrea Marshall.

Lieutenant Lucy O’Connor, a former international boxer, was watching and said she was inspired by the increase of women getting into the ring.

“Almost every club now has a female contingent whether it is competitive or just for fitness,” Lieutenant O’Connor said.

“That is such a difference from a few years ago where there were a few clubs in the country that didn’t allow women through the door.

“We’ve come such a long way and now, it is normal to see female boxing in the amateurs, whereas it was a bit of a novelty before.” 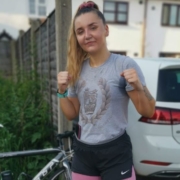