You are here: Home / News Articles / Reminder for coaches to respect corner rules

England Boxing has issued a reminder to all member clubs and coaches ahead of the competitive 2019-20 season getting into full swing reminding them of the code of conduct for events.

In February 2019, the ‘RESPECT – plain and simple’ campaign, calling on everyone within the sport to treat each other as an equal, and with the respect they deserve, was launched.

As part of that, a communication has been sent out reiterating the importance of adhering to guidelines set out in the England Boxing Rulebook.

It is part of a determination throughout the 2019-20 season and beyond to ensure that the need for respect across boxing is collectively agreed, supported and demonstrated, with mutual buy-in needed from officials, competitors, coaches and spectators.

The rule reminder is as below:

3.6.2. of the England Boxing Rulebook states that Rule 14 of AIBA Technical Rules shall apply to club boxing, in particular Rule 14.2.3 which reads: “Seconds will not be permitted to stand up and/or to encourage or incite spectators by words or signs during the progress of the round. Seconds will not be allowed to touch the ring during the bout, yell, clap or cause a scandal or disturb the competition”. 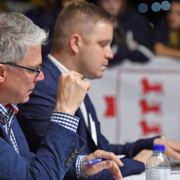