Yesterday, Team GB collected their first Gold medal of the games and it was boxing’s Hope Price that claimed the victory in the fly weight final.

Hope started the round using his height and reach advantage to stop the Thailand boxer from getting up close.

A sudden change in tempo with a double attack landed on the Thai boxer causing the referee to intervene and issue a standing 8 count.

As the count progressed it was clear to see the Thai boxer was unable to continue bringing the referee no other option than to stop the contest at 109 seconds into round 1.

The first Gold medal of the boxing finals was awarded to Team GB’s Hope Price.

Hopey was interviewed by the BBC after his bout and can be seen here – https://www.bbc.co.uk/sport/av/olympics/45897713 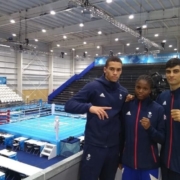 BBC Young Commentator of the Year
Scroll to top