Connor started well and quickly found his range and timing to take a first round lead. His opponent came out flying in the second and Connor struggled to adjust to the opponents change in tactics and tempo. The last round was extremely close, as Connor gained his second wind both boxers raised the tempo looking for the win.

in a repeat of the recent European Youth Semi Finals where Hassen won, this contest was again one of the best bouts of the day. Both boxers were evenly matched and it was a contest that was nip and tuck throughout with Hassen pushing forward and his opponent looking to counter at every opportunity.

Hopey established his range and commend of the contest from the first bell, catching his smaller opponent continuously as he tried to close the range. As the bout progressed his opponent became more aggressive in raising the tempo  and continuing to put pressure on Hopey, who showed his experience in calming picking his shots to score well on the back foot.

Karol set the pattern of the contest from the first bell, pressuring his opponent onto the back foot with well time phases of attack from his southpaw stance. This set the tempo and shape of the whole three rounds with Karol looking to trigger then engage and his opponent looking to draw Karol in and counter.

Both the other two boxers will continue to use this tournament as a prep camp for the Worlds and will be sparring today against boxers from Russia, Ukraine and Spain. 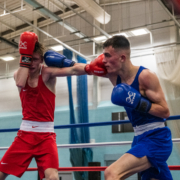