A pioneering programme that has invited people with Parkinson’s disease to have a go at boxing is attracting national attention after being a roaring success.

Run by England Boxing-affiliated club St Mary’s ABC, who are based in Medway, Kent, the first session on Saturday (1st December) was attended by local MP and former UK Sports Minster Tracey Couch, as well as councillors Tris Osbourne and Sam Craven and partners Arches Local.

The Boxing for Parkinson’s programme enables anyone with Parkinson’s and their carers to don boxing gloves and train in a safe, monitored and controlled environment.

Participants also have the opportunity to socialise and chat before and after the session – with a welcome cup of tea, of course.

The launch day success has already helped to secured funding and donations from Kent Sport, Councillor Sam Craven and a Medway author.

It will ensure sessions will remain free to everyone moving into January, thereby removing a cost barrier that could stop people coming along.

The project is to feature on KMTV next Monday (10th December) and also local radio, with Wayne Smith, a coach from St Mary’s, and Phil Bungay, from Parkinson’s Medway and District WAG, explaining how the programme has been set up.

“Everyone enjoyed the launch and the programme has received a great welcome by all. The Medway people are extremely excited to have this locally,” said Smith.

“The word has well and truly spread about the success of the programme and we have been contacted from up and down the country regarding it. Off the back of it, we have had other organisations wanting us to come and run programmes for them.

“We have just announced a Boxing For Older People programme that we are going to be running in Maidstone and have meetings with a Dementia Charity in Gravesend regarding a Boxing For Dementia programme.

“Once again, boxing is proving so powerful in helping all of the community achieve greater health, whilst having fun and socialising.” 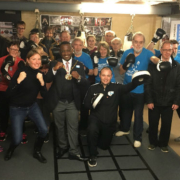