Neither woman entering the ring tonight for the final bout of the female programme at the England Boxing National Amateur Championships 2019 Finals Day will lack motivation – albeit for different reasons.

The Under 81kg match-up between Salisbury’s Carly Ogogo and Bolton B&Gs Cindy Ngamba, scheduled for 7.40pm, brings together two boxers eager to showcase their skills on the big stage that an expectant crowd at Manchester Central and a national TV audience will bring.

Ogogo has enjoyed a taste of things at the top before, briefly training with GB before suffering problems in both knees that required surgery.

By the time she had recovered, selection had moved in a new direction and, disappointed as she was, she decided to take a break and go travelling.

But after returning to Liverpool where she first studied in order to complete a PGCE that has allowed her to become a teacher, the 26-year-old soon needed to scratch the boxing itch and after 18 months of training is ready to get back in the ring.

“I got inspired by the London Olympics and made decent progress with my boxing until my knees started given me trouble and I had no choice really but to have the treatment on them,” said Ogogo.

“Of course, by the time I got back I had lost too much ground, so I decided to take a year out and go to see some of the world, including South Asia and Australia, which was a great experience.

“While I was away, I spoke to my mum and told her that I didn’t really miss home apart from the boxing. So when I got home I moved back to Liverpool and made it happen.

“It can be tough working in a school, coaching the kids afterwards, which I soon got asked to do, and then training after that, but it’s not a bad life, is it?”

Ogogo is the sister of 2012 Olympic bronze medallist Anthony, who was forced to call time on his professional career earlier this year because of injury.

Her elder sibling will miss her bout as he will be away on holiday, but she has been sure to seek his advice before he departed.

She said: “It’s really good to have someone like that, a fellow boxer, to chat things through with before a big bout like this, and he’s given me one or two pointers.

“The coaches at Solly are also absolutely top drawer and hopefully I can do them proud. After coming back from the surgery, it would the world to me to win a national title.”

For Ngamba, competing at this level is a new experience, but one she is nonetheless relishing.

The Cameroon-born boxer may only have boxed in six bouts to date, but she has won all of them and is determined to give Ogogo a stern test.

The 20-year-old, who also boxes for the North West Warriors squad, says that boxing has not only helped her lose weight, but has also given her self-confidence and helped her overcome her natural shyness.

This evening, she aims to underline her remarkable progress by putting in an eye-catching performance that could put herself in the frame for England selection.

“When I was at college I was overweight, 110kg, so I went to the club where I now box and they did different sports, including football and others things, but I wanted to box, so that’s what I did,” said Ngamba.

“Boxing was a way of relieving the stress, but it also helped me come out of myself a little and not be as shy. I gradually realised it was something I was good at.

“I had my first bout at 86kg, but by losing more weight and getting down to 79kg, I’ve been able to get more bouts. I started when I was 15, but it took me a while to get my skills up to scratch, so all my bouts have been as a senior.”

Ngamna has seen Ogogo box before and recognises she will pose a different challenge to all her previous opponents.

But the younger woman believes she has it in her to win and said: “Carly is a lot taller than most women you will box, opponents are usually around my height, but it’s something I’ve needed to work on and have worked on.

“Winning the title would be amazing and hopefully it would open up the opportunity to box internationally if I did.

“I only live 10 or 15 minutes’ walk from my gym, so it’s easy to get down there and put the training in, which will hopefully pay off.”

If you fancy coming along to watch today’s action, which starts at 2pm, you can buy tickets to watch the action on the day, with doors open from 1pm.

If you can’t make it to Manchester Central, you can watch all the action unfold live on BBC Sport online or on our YouTube channel. 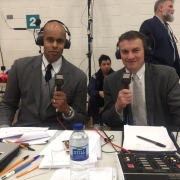