Karriss Artingstall secured a second medal for England on day five of the EUBC European Women’s Championships 2019 in Madrid, Spain.

Artingstall, boxing at 57kg, won 30-25 on all five judges’ scorecards to ensure she reached the last four.

But there was disappointment for Derby boxer Sandy Ryan in her all-GB clash with Rosie Eccles of Wales.

A close bout went the way of her opponent in the way of a 3-2 split decision, meaning the reigning Commonwealth Games champion missed out on a medal.

There is no boxing today (Thursday), as it is a rest day, with boxing resuming tomorrow (Friday) when both England’s semi-finalists will be in action.

Demi-Jade Resztan (48kg) competes in the first bout of the afternoon session as she takes on Hanna Okhota of Ukraine before Artingstall faces Bulgarian and number one seed Stanimira Petrova in the third bout of the evening session. 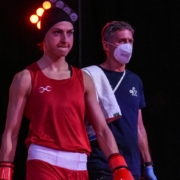 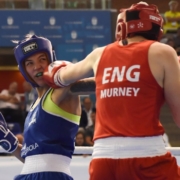 Aim to show that We Are Undefeatable
Scroll to top