She toured three clubs in the North West region and one in Merseyside and Cheshire to see what is being done in boxing to tackle the problem – as well as the issue of holiday hunger.

The projects in the North West and Merseyside and Cheshire are a reflection of what is happening in many community boxing clubs across England this summer. 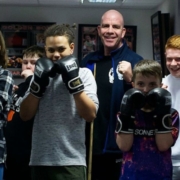