yne, Tees and Wear club Fight Fitness Guru members are helping to raise money for the NHS during the Coronavirus outbreak by shaving their hair off.

With local barber shops shut due to the government lockdown, 10 people at the Consett-based club have committed to the extra sharp trim already.

Others are being encouraged to join in (parental permission is required if you are under 18) and / or donate some money to the cause.

If people are not in a position to support this financially, they are asked to share the cause on social media using the hashtags #StaySafe #SupportingNHS #TeamFFG

The idea came about after the club spoke to boxers in group chats and decided to raise some money to support our NHS at this crucial time and set up a Just Giving page where boxers, coaches and families could all join in to raise money.

“While the club were not expecting to get anywhere near £400, one of its coaches, who at first point blank refused to shave his head, said if it got to £400 he would do it,” said TTW and North Club Support Officer Laura Sargeant.

“As a club FFG are keen to engage with its community and help where they can and I know they are very proud of everyone who has taken part.” 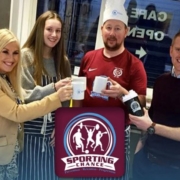