Boxers from the GB squad representing England have guaranteed four medals in today’s quarter-finals at the AIBA World Boxing Championships 2019 in Ekaterinburg, Russia.

Peter McGrail, Pat McCormack, Ben Whittaker and Frazer Clarke all guaranteed they will come home with at least a bronze medal and now have the opportunity to upgrade to gold or silver in Friday’s semi-finals.

It is the joint-best ever medal haul by a group of boxers from Great Britain and matches the achievement of the team that won four medals at the 2011 World Championships in Baku.

A day that ended in celebration began with a two disappointing results as Galal Yafai lost to Billal Bennema of France and Cheavon Clarke was outpointed by Russia’s Muslim Gadzhimagomedov.

Fortunes changed in the afternoon session when Liverpool’s Peter McGrail outpointed India’s Kavinder Bisht to secure a second World Championship medal to go with the one he won in Hamburg in 2017.

He was soon joined in the semi-finals by welterweight, Pat McCormack, who overcame Sewarets Okanzawa of Japan on a 3-2 split decision to secure his first ever World Championship medal.

Ben Whittaker made it three in the light-heavyweight contest as he deployed his superior boxing skills to record a 4-1 victory over Jerome Joseph-Pampellone from New Zealand.

It was left to super-heavyweight, Frazer Clarke, to round-off a great day for GB Boxing as he overcame the highly experienced, home crowd favourite, Maxim Babanin, to edge a 3-2 split decision.

It was Clarke’s first ever World Championship medal in his first appearance at the tournament.

All four boxers go into Friday’s semi-finals which will be shown on the BBC Sport website, i-player and red button. 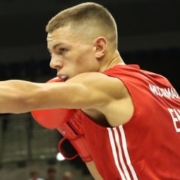